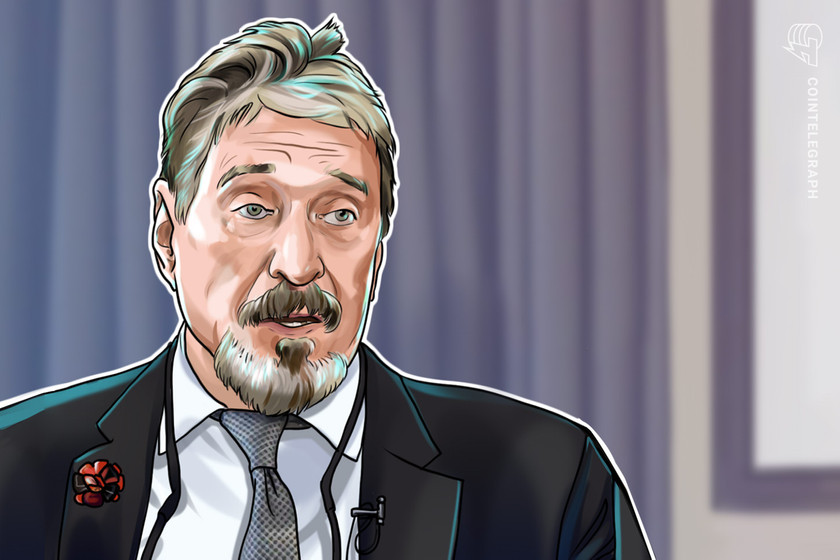 Software antivirus pioneer John McAfee has told his one million Twitter followers that his entire crypto fortune is gone — although he concedes not everyone will believe he’s telling the truth.

The McAfee antivirus founder has been behind bars in Spain since October 2020 — when he was arrested for tax evasion — but that hasn’t stopped him from posting on Twitter on a near-daily basis.

The 76-year-old tweeted earlier today that “I have nothing. Yet, I regret nothing,” and noted that:

“The US believes I have hidden crypto. I wish I did but it has dissolved through the many hands of Team McAfee (your belief is not required), and my remaining assets are all seized. My friends evaporated through fear of association.”

The U.S. government is currently seeking McAfee’s extradition, with a ruling set to come from Spanish courts in the coming days.

McAfee has a litany of charges aimed against him, including the alleged operation of two “pump and dump” related crypto scams that duped investors out of $13 million.

If extradited, McAfee will face court on charges for evading taxes between 2014 and 2018, after he failed to report income from multiple revenue streams such as crypto gains, paid crypto promotions, consultancy work, and selling the rights to his life-story documentary.

I can see a small piece of sky above the tall concrete walls of the prison yard. The walls seem to frame, in contrast, the deep blue sky and the fluffy clouds drifting through it.

It turns this tiny sky window into a jewel of extraordinary beauty.

McAfee’s life behind bars appears to be one of contemplation, as he regularly tweets messages with tones that switch between sorrow, acceptance for his circumstances, mixed in with sparks of aggression towards the U.S. governing bodies.

In the June 9 tweet, he notes that “after uncountable lawsuits and the reach of the FED’s I now have nothing. But inside these prison bars I have never felt more free. The things you believe you own, in reality own you.”

I have a million followers but I’d be surprised if even 1% bother to read my tweets.

As you may guess I’m having a down day.

It is a stark contrast to McAfee’s earlier years in which his net worth grew to $100 million from his successful anti-virus software firm. McAfee used to own a mansion worth more than $5 million in Colorado springs, and even lived on a luxury yacht out in Dominican Republic waters, which he dubbed a “freedom boat.”

According to the June 2020 indictment from the Justice Department’s Tax Division and Tennessee prosecutors, McAfee faces a minimum of five years on each count of tax evasion and a one-year minimum on each count of willful failure to file a tax return.

Given his age, the serial entrepreneur is likely to spend the remainder of his life behind bars if found guilty.

McAfee spoke at Spanish High Courts this week during the first hearing of his extradition trial and asserted that charges from U.S. governing bodies are politically motivated due to his two attempts to run as a Libertarian Party candidate in the U.S. presidential elections. He says he drew the IRS’s attention in 2018 when:

“I also announced I would target the IRS and its corruption, and two months later the IRS filed charged against me.”

Spanish prosecutor, Carlos Bautista rejected this claim and described McAfee as a “tax rebel, nothing else. A millionaire who doesn’t want to pay taxes.”

There is much sorrow in prison, disguised as hostility.

The sorrow is plainly visible even in the most angry faces.

I’m old and content with food and a bed but for the young prison is a horror – a reflection of the minds of those who conceived them.